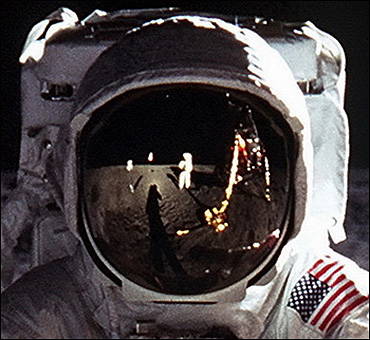 Just finished listening to MOONDUST: In search of the men who fell to earth. This was a fascinating account of, well not just the Apollo programme and landings, but of the author, Andrew Smith's personal attempt to meet and talk to all of the people who have walked on the moon.

I was quite amazed at how long ago this happened, and that the first landing was when I was about 10 months old. When I asked my mother if we had watched it, she said my dad probably did, but she didn't. Was I there? Did I see the "LIVE FROM MOON" flashing ZX81 style graphics overlaid on the screen while my father was excitedly watching, along with most of the rest of the world? I'm sad I missed it - if I did - I'm sad I will never know about what happened then, where I was, if I was by a turned on TV. But I feel it did happen. Men went there.

But what of it? I remember when I was growing up I always heard people say "If they can put a man on the moon they can [insert some kind of unfixable social problem here]." But did they? No. No government can truly fix the worlds problems.

I haven't heard people talk about men on the moon for a while that way. And It's not surprising that now, people doubt they ever went there. I think they did, but wish they had carried on going. The book says that China was trying to get to the moon again. I'm not sure when this was planned, or if they still are, but would love to see full HD images beamed back from the surface and to watch it live with my kids. Of course now we DO have the technology to do a realistic hoax, but also probably have the technology to detect it as well.

I'm not going anywhere with this post. The book was interesting and really gave me a thirst for finding out more about Apollo than the standard Discovery channel programmes and the Right Stuff and Ron Howard's Apollo 13. I'm going to try and find if any of the 12 men who did walk on the moon, of which only 9 are still alive, have any biographies available on audiobooks. I may write again about them if I find any.

Image from NASA archives from wiki which states it is public domain. Used without permission but assumed ok.