Well, just got back from wandering around Collectormania 9 - its not really a Convention as the whole thing is geared towards getting signatures - its £15 for a signature, for most of the stars, and £20 for Levar Burton and Jonathan Frakes. And there were masses of dealer tables. 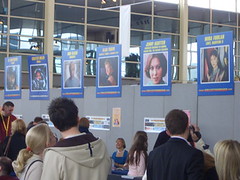 Its in a shopping centre about 5 miles away from where I live. In most cases you can just walk up to the signing table, pay your money and have a signature and a photo if you've got a camera (and a friend)

The funny thing is the biggest queues seemed to be for Book, Wash and Jenny Agutter. Didnt get a signature (Saving my money for the Serenity Screening) but you can see all the guests and take pictures from a distance. Mira Furlan was there without a real queue, and has a lovely smile almost all the time, strange because I thought she might be more popular because of Lost. Pat Tallman and Caitlin Brown were around the corner, with no real queue or interest at all. I wanted to go up and talk to them but thought I might just turn into a gibbon, or be escorted away, so didnt go. Pat Tallman is JUST the same as she looked in B5, and as her publicity photo looks.

We wondered off to the rest of the stores, and walked out of a toy shop to have to follow Levar Burton down the way, which was bit surreal. He just had a rucksack..

Well I went and borrowed a nice digital camera a Nikon D70 with a huge zoom on it so that I could take some photos of the event on Sunday. The Serenity talk and screening were at the budget cinema at 4:30pm. So I went up to the shopping centre at about 3pm to get some pictures of the celebs.

Yesterday I'd seen Mira Furlan, who to be honest was the one I wanted to talk to, sitting on her own with no one going up for signatures on Saturday, and felt a bit sorry for her. So I got some money out in case this was the same today, so that I could go and have a chat. The website says that you may be able to talk to the guests without paying for a photo/autograph if they are quiet and if they are in the mood.

Interestingly, the Phelps Twins (Weasley Twins - Harry Potter) and the Star Trek guy (Frakes and Burton) were the only ones who seemed to have the "No Photos without Autographs" signs up on their queues - at least when I was there.

Well today was hellish, huge crowds and difficult to get to the stars, but Mira didn't have a queue. She was standing up, looking slightly bored, when I got there, and took a few snaps from a distance, but then she put her coat on and wondered off.

Mira Furlan and Pat Talman
with no visitors..

Pat Talman was there, sitting next to Mira's station, but she looked like she didn't want to be there as well, so I didn't try to talk to her. Caitlin Brown (Na'toth) was there, but after listening to her interview on the Babylon podcast I think she really was there as a organizer as she seems to have a company that gets stars for these events. This was proved to me when I was looking for past collectormania events and I saw this picture. Caitlin was sitting on the organizers desk and seemed to be on the phone all the time. I was going to go and speak to her, but she was way too scary. I suppose if she was making money by attending, and getting everyone else to attend, she was less bothered by signing things.

Mira's Smile
with no visitors..

So I wondered around for a while, taking a few more snaps and then decided I would walk to the cinema via the toilets in the centre (didn't want to have to miss any of the film or the talk)

As I was on the way down the mall this time who do I spot but Mira walking towards me, without a bouncer and not it shades. I gave her my best "I love your work, but I'm not a stalker" smile, and I get the loveliest, genuine smile back. So that made my day.

There were no brown coats in the queue, but obviously we were all BrownCoats.

So I get outside the complex and go to the cinema, and the queue is out of the doors. Since this cinema went budget (sometimes you can see a film for £0.20) I've never seen such a queue.

There were no brown coats in the queue, but obviously we were all BrownCoats. The couple behind me had serenity t-shirts on, and there was a cunning Jayne hat about 20 in front of me.

There was a European sounding girl who was befriended by a English (or possibly American - the accent was too mid-atlantic) girl who were very excited in front of me, but there wasn't the general buzz in the queue that I would have expected (there was a better buzz at the opening of the Apple Store in London than here) But I don't think that this was a British fans thing, because there were a lot of non-British accents in the queue.

After a while one of the organizers came out to explain that we would have the talk in one cinema screen, and then go and watch the film in another, so that they could use the setup for the talk for the next talk, which was a Harry Potter one.

At this point I saw about 6 girls in front of me with white tops with www.Phelps-Twins.de on them, so I assume that was the German HP fans contingent in the wrong queue. They're just not the same quality as browncoats are they?

Eventually we were led in, into Screen 8, and were told the score by one of the organizers, Cameras ok, Flash ok at the start, no videos or camera videos as it puts the guests and people behind you off. Thankfully my camera worked fine without flash, but I wish I had taken some kind of audio recording device in with me, as there wasn't any restrictions on that. 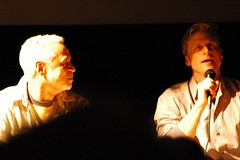 So after a while, and to a round of applause, in walks Alan Tudyk and Ron Glass. Alan immediately pratt-falls over the desk, grabs all of the bottles of water (including Rons) and pretends the microphones are not working. Well done at breaking the ice Alan.

Alan definitely takes over the event - I think he said about 15 words to every 1 of Rons. And he just launches in to a talk without any questions being asked. I honestly cant remember a lot of what was said, hopefully someone did get an audio recording, but heres the few bits I remember:

As the talk had to fit into the cinemas schedule it was drawn to a close. And after waiting for the guests and wheelchair users to leave, we all wondered to Screen 3 for the BDM. The film started when everyone got in the theatre, straight in to it with no adverts

There was a brief cheer when it started.

There was a lot of laughing at the jokes, and a round of applause at the end, but again not the buzz and atmosphere that I would have expected from a theatre full of browncoats. But this was my first time and I'm told it is normal. There was a huge laugh at Rivers "Am I talking to Miranda Now" face, and the "I swallowed a bug" and "There might even be tears" lines, but that was about it. When Wash was landing the broken ship it went deathly quiet, and lots of arms went around the people sitting next to them. You could have heard a pin drop - Or a Harpoon twang?

Then finally the credits rolled, and a lot of people left in the credits - which I was also surprised at.

So that's my experience from Collectormania 9 - depending on who is going to be there I may well try and attend the G-Mex one later in the year.

My flickr stream of my photos from this event